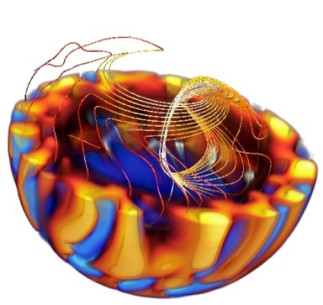 Among the many fascinating aspects of the solar dynamics, the structure of the tachocline (thin region located at 0.7 solar radius in the interior of the Sun) has been puzzling the solar physicists for many years. In particular, its extreme thinness (less than 5% of the solar radius) has not been satisfactorily explained yet. Some theoretical models have been proposed to explain its structure, among which one postulated the existence of a (fossil) magnetic field, buried in the radiative interior of the Sun, that would confine the tachocline to a thin layer. We present pioneer 3D MHD global solar simulations coupling the turbulent convective zone and the radiative zone that have been carried out to test this scenario. Essential features of the Sun, such as differential rotation, meridional circulation and internal waves excitation are recovered. We find that an initially confined axisymmetric dipolar fossil field does not confine the tachocline and couples the convection zone to the solar interior. The three- dimensional convective motions are shown to play an essential role in the transport of magnetic field and the failure of the confinement scenario. Because of its axisymmetry, the dipolar field is moreover able to transport the mean angular momentum radially, accelerating the loss of confinement of the tachocline. Other primordial magnetic field configurations are also considered. We find a similar evolution of the solar interior in the case of an inclined dipole (with respect to the rotation axis of the star). The special case of a perpendicular dipolar magnetic field results in a significantly different evolution compared the aligned dipolar case. Nevertheless, the magnetic confinement scenario for the tachocline fails in the three cases, in the parameter regime we have explored