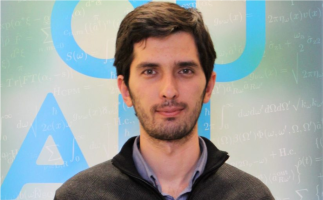 Abstract: Magnetic cooling systems based on magnetocaloric effect (MCE) have been considered as an alternative solution to the actual gas compression technology in terms of their higher energy efficiency and being environmentally friendly [1]. In the case of domestic magnetic refrigeration, one needs to have a magnetic material with a near room temperature magnetic transition and a significant magnetic entropy change over a wide temperature range covering roughly the 20° C to -20° C. For some magnetocaloric refrigeration cycles, a so-called table-top temperature dependence of the entropy change would be a great asset and several routes to achieve it have been explored. Among the many oxide families which show significant magnetocaloric effect close to room temperature, manganites of general formula R1-xAxMnO3 have received enormous attention due to their advantages such as small thermal and magnetic hysteresis, high chemical stability and tunable transition temperature. Similarly, double perovskites of general formula A2BB’O6 have also attracted interest [2]. Their main advantage over R1-xAxMnO3 is their high resistivity. As many other oxides, the magnetic properties of manganites and double perovskites can be tuned in using doping with different elements or changing the growth conditions [3] allowing to shift their transition temperature, but also manipulating the width of their transition in the hope of achieving table-top entropy change. As another approach, one can tune material properties by combining different systems in a composite structure. In this case people usually combine materials with different transition temperatures to get magnetic entropy change over a wide temperature range.

In this work, we used pulsed laser deposition (PLD) technique to growth bilayer and trilayer composites of two different oxides La2NiMnO6 (LNMO) and La2/3Sr1/3MnO3 (LSMO) on LSAT substrates. In bilayer samples we were able to affect the ratio of the cation ordering in LNMO layer by changing the arrangement of the layers. We get a cation-ordered LNMO layer with a magnetic phase transition at 230 K when it is deposited on a bare substrate. However, it shows a lower magnetic phase transition temperature at 180 K when it is grown on top a LSMO. This behavior driven by strains can be used in trilayer samples where three magnetic transition can be detected, which enables us to get a fairly flat and roughly temperature-independent table-top magnetic entropy change over a temperature range as large as 100 K. These results suggest a route through composites to tune the magnitude, shape and width of the temperature dependence of the magnetic entropy change. This technique allows us to tailor an appropriate material for magnetic refrigeration at room temperature by changing the arrangement of layers.