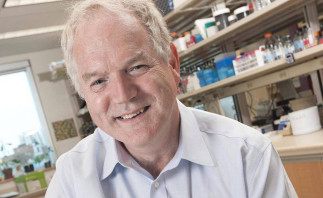 HCV vaccination: the final frontier in controlling the HCV pandemic

This conference is part of the The Marie and Willie Chrétien Conference Series. Due to the COVID-19 pandemic, the conference series will be presented on Zoom. Free : public conference open to all

Dr. Michael Houghton was the Canada Excellence Research Chair in Virology from 2010-2018 and is the Li Ka Shing Professor of Virology at the University of Alberta where he is also the Director of the Li Ka Shing Applied Virology Institute. He was jointly named the 2020 Nobel Prize winner in Physiology or Medicine along with Harvey J. Alter and Charles M. Rice in recognition of the discovery of the hepatitis C (HCV) virus.  His research in the field of viral hepatitis has led to protection of the world’s blood supplies, and hepatitis C treatment to the point where the viral infection can now be cured in virtually all patients. He and colleagues have been working on a HCV vaccine first at Chiron/Novartis & subsequently at the UofA, along with the US NIH, and have developed the only HCV vaccine candidate shown to be protective in animal models and which can neutralise the in vitro infectivity of most global strains of HCV.

Born in the United Kingdom, Houghton graduated from the University of East Anglia with a BSc in biological sciences in 1972, and subsequently completed his PhD in biochemistry at King's College, University of London in 1977. Houghton joined G. D. Searle & Company in the UK studying human interferon gene regulation before moving to Chiron Corporation in 1982 where together with Chiron colleagues Qui-Lim Choo and George Kuo, and Daniel W. Bradley from the Centers for Disease Control and Prevention, first discovered HCV in 1989.  Houghton was co-author of a series of seminal studies published in 1989 and 1990 that identified hepatitis C antibodies in blood, particularly among patients at higher risk of contracting the disease, including those who had received blood transfusions.  This work led to the development of a blood screening test in 1990,and widespread blood screening that began in 1992 with the development of more sensitive tests which has eliminated hepatitis C contamination of donated blood supplies in Canada and around the world. His group also identified key enzymes in the viral replication cycle that have been the target of successful drug development by international Pharma companies.